CHAPTER I: The Last Breath Chapter

From Dead by Daylight Wiki
(Redirected from CHAPTER I)
Jump to: navigation, search

CHAPTER I: The Last Breath Chapter is the first Chapter DLC for Dead by Daylight.

The Last Breath is the first Chapter for Dead by Daylight. It provides a glimpse of the effect of insanity in its purest and most violent form, as players gets to visit the Crotus Prenn Asylum. You'll also meet a new Killer, the Nurse, and the Survivor Nea Karlsson.

Wretched minds, screaming in the dark can still be heard late at night. A Nurse with an equally distorted mind as those she treated. A Survivor with catlike movements. And an asylum that nobody left sane...or alive.

To work close to pure insanity is something that consumes the mind – warping it into something odd and feral. Sally Smithson's futile attempts to remain civilized failed, pushing her over the edge, making her “treat” several patients in a much more fatal manner.

The Nurse is a horrid creature with a power called Blink, making her able to teleport between two locations. The Nurse can only teleport in a straight line, but teleporting can be linked – making her move across a larger area. The Nurse also comes with 3 new Perks, emphasizing on tracking and finding Survivors.

Nea had a good upbringing, in a small, rural town in Sweden. She never thought she'd be one of those with baggy pants who's tagging government building in the night. But being uprooted does something to a human, and her parents weren't that understanding to how Nea's life changed. So Nea fled the “normal” life her parents wanted her to live, and took refuge to the streets.

Staying Under the Radar

Nea is agile and quick. Years on skateboards and duping cops have made her beyond streetsmart, and as she's often spending days away from her comfortable and safe home, she's clever than most. Nea Karlsson comes with 3 new Perks, emphasizing on evasion and speed.

A Place of Screams 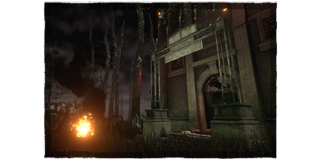 Crotus Prenn is a place where poor unwanted souls are gathered. Outcasts who either sought a job or delusional men and women who were in dire need of a straitjacket. Shock Therapy was the most popular dish to provide to the loyal customers, and ether was often administered among the staff as everyone just tried to hold on to whatever kind of long lost hope there was.

Everyone Is Welcome at Crotus Prenn! The Asylum is a brand new map for Dead By Daylight. It's set in the former Asylum Crotus Prenn, a place filled shock therapy rooms and rotting beds. Damp mold fills the lungs of those who enter its realms. Inside, it's easy to start questioning everything you thought you knew about your own senses as insanity has marinated the walls.