CHAPTER XIII: Stranger Things is the thirteenth Chapter DLC for Dead by Daylight

Stranger Things is a brand-new Chapter for Dead by Daylight, which includes a new Map. Purchasing the Stranger Things DLC will unlock its new Killer and two new Survivors.

It was the early 1980s, a time of cold war experiments and naive fascination, a time of stranger things. In the small town of Hawkins, Indiana, covert experiments were being conducted.

When an inter-dimensional gate was accidentally opened at the Hawkins National Laboratory, an army of creatures with long, curved claws and gaping faces that bloom like horrific flowers was unleashed. These creatures were labelled "Demogorgons" by a group of local kids who encountered them.

Nancy Wheeler's knack for investigative journalism first emerged when she brought down a secret government organisation in Hawkins following the disappearance of her closest friend, Barb. Her being fired from the Hawkins Post during the summer of 1985 has not dissuaded Nancy from chasing leads...

Formerly a popular jock, Steve Harrington, is struggling to find his place in Hawkins now that high school is over, and his old friends moved away to college. Since then, he's spent his time scooping ice cream at the mall, flirting with girls, and cracking secret Russian codes. With the help of his friends Dustin and Robin, Steve is carving out a new identity for himself and learning what true friendship really means. It's this newfound loyalty to his friends that compels Steve to come to the aid of his ex-girlfriend, Nancy when he suspects she might be in terrible danger...

A blooming mouth full of needle-like teeth for a face, large, curved, razor-sharp claws, and powerful legs to pounce on victims, make The Demogorgon a frightening monster to face in any dimension. It is a nightmare of unrestrained, feral rage as it hunts down its prey and rips it to pieces, devouring every last morsel of flesh and gore, leaving nothing for scavengers. The creature is untouched by any sense of compassion or restraint. Looming over its victim, it shows no doubt or mercy, just the pure instinct of its insatiable blood lust as it delivers the deathblow. A perfect hunter, The Demogorgon is a macabre testament to the horrors lurking in the Upside Down and why it was choice pickings for The Entity.

Killer Power - The Demogorgon: Of the Abyss

An unknown and otherworldly power surged through its body. Suddenly the ground ripped open, swallowing The Demogorgon whole.

Of the Abyss:
Press and hold the Power button to fully charge and activate Of the Abyss. All Survivors within a close proximity to a placed portal will be indicated by Killer Instinct.

Special Attack: Shred
Press the Attack button while charging or holding Of the Abyss to dive forwards and unleash a vicious slash.

Studious and rebellious, Nancy Wheeler is a stubborn investigator with an instinct for a good story. When her closest friend, Barb went missing, she did everything she could to unravel the truth and secure justice. A brilliant journalist, she chases stories and follows leads despite the inequality and chauvinism she encounters at the workplace. Pursuing a lead one evening, she fearlessly approaches the Hawkins National Laboratory before suddenly losing consciousness. A moment later she awakens in a strange misty realm with the sound of a familiar roar echoing through the air.

Popular and arrogant, yet compassionate, Steve Harrington is an unlikely mentor and leader. He often acts as a surrogate big brother to a younger boy named Dustin. He even helped him find his slimy inter-dimensional pet Demogorgon, D'Artagnan. His reputation as a protector grew and he soon became a sort of "babysitter" for a group of kids in Hawkins with a knack for messing around with strange and dangerous things. His courage is unmatched so that he was even able to fend off a Demogorgon when it threatened his friends. One evening he received a call for assistance from his friend Nancy Wheeler. He drove all the way to the Hawkins National Laboratory to see if she was okay. He searched the area but only found her notebook. Before he realised what was happening the ground opened up and a swirl of black mist filled his eyes. When he awakened he was in a strange place that seemed familiar but unfamiliar at the same time. 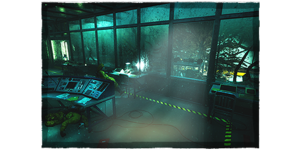 Located below the Hawkins National Laboratory, this underground complex released dozens of inter-dimensional creatures in November of 1983, before the rift was sealed.

The site kept some vestiges of its past as the mental health institute, including a mouldy isolation tank used by patients suffering from acute anxiety that was later modernised for mind control experimentation on promising test subjects.

Now the walls of the abandoned facility are sprayed with bullets and blood, evidence of a battle against inter-dimensional creatures.

CHAPTER XIII: Stranger Things was first teased after the official Netflix Twitter account posted a tweet during E3 2019 which told players to "watch out" for upcoming projects with different companies. Behaviour, the developers behind Dead By Daylight, was one of them. Link