From Dead by Daylight Wiki
(Redirected from CHAPTER XVI)
Jump to: navigation, search

CHAPTER XVI: Silent Hill is the sixteenth Chapter DLC for Dead by Daylight

Silent Hill is a new Chapter for Dead by Daylight. It includes a Killer, The Executioner; a Survivor, Cheryl Mason; and a map. Purchasing the add-on will unlock its new Killer, new Survivor, and an exclusive universal Charm: the Seal of Metatron.

The Silent Hill Chapter includes a new map, Midwich Elementary School: the childhood trauma that once took place in its halls has since manifested itself into a twisted, nightmarish design.

The new Killer is The Executioner: take control of Pyramid Head and wield his great knife to unleash his twisted brand of punishment on all who cross him.

The new Survivor is Cheryl Mason, a courageous, outspoken woman who survived the hellish Otherworld of Silent Hill, and exacted revenge on the Order that killed her father. With experience beyond her years, she's prepared to once again stand against any evil that confronts her.

A sadistic and merciless executioner, Pyramid Head is fixated on dispensing punishment through pain. Encumbered by the steel frame upon his head and with a hulking great blade in tow, he stalked the hellish corridors of Silent Hill, committed to a duty that no one truly understood. Where he trod, even monsters fled for the shadows, and those who crossed his path fell victim to unrestrained acts of aggression. When his duty was complete and his presence no longer needed, he prepared for the long rest—and yet, his skills were required elsewhere. The fog that streamed over him was somehow different than that he was accustomed to in Silent Hill, as if each wisp contained the nerves of a creature, writhing, seeking him out. There was an unspoken agreement in that moment. The billowing cloud was an invitation to duty and sadism, and Pyramid Head, taking a step into the fog, accepted his obligation once more.

The Young Veteran of Terror

Caring and impulsive, Cheryl Mason, previously known as Heather, attempted to rebuild her life after the tragic death of her adoptive father, Harry Mason. While she had freed herself from the religious cult that pursued her since birth, she was shackled by the guilt of her father's death. A darkness punished her every night under the guise of abominable nightmares.

To ease her conscience, she volunteered at a crisis intervention center for troubled youth. Three months later, she aced training and could answer the crisis line without supervision. Yet little could have prepared her for the first call. All she heard was static. The air thickened as black fumes rose from the ground and suddenly she heard the voice of a woman—someone she thought she'd never hear from again. Why do you cling to this corrupt world? You know that only God can save us. It couldn't be her—Claudia was dead. Suddenly, the world spun and she dropped on her knees, nauseous. Hot bile traveled up her throat and she retched warm blood on the floor. Then the spinning stopped as swiftly as it began. Cheryl looked up and saw she was somewhere else. A cold, hopeless place. 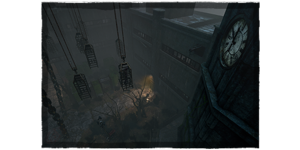 To students who were bullied by their teachers and classmates, attending Midwich Elementary School was comparable to torture. As the Order's grip on the town's supernatural energies tightened, a transformation occurred. The childhood trauma that took place in the building manifested itself into a twisted, nightmarish design.

Though desks and textbooks remain, they are eerily contrasted with stained walls, rusted chains, and hanging cadavers. Any notion that this could have been a place of innocence and learning has long since faded.''

Owners of the DLC can enter the infamous Konami Code at the Main Menu screen, after which a 16-bit version of the Dead by Daylight Theme will play and a special Charm is unlocked.
The Charm, called "Vic Viper" is a memorandum to the spacecraft of the same name one controls in the 1985 Arcade Game Gradius, developed and published by Konami.

On the new Map, Midwich Elementary School, there is a Secret Room located in the Clock Tower out in the courtyard of the school.
In order to access the Secret Room, one must repair two specific Generators in a specific order and then trigger the Endgame Collapse.