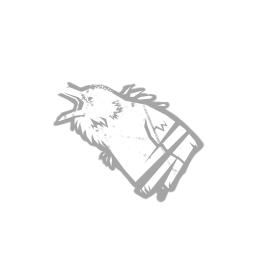 Often found in pairs, they are usually perched on top of rocks and crates around the outskirts of the Map, but can also be found standing on the ground in an area without rocks and crates.

If a Player is too close to a Crow, they will make a small noise and fly above the skybox. They will then return 15 seconds later, possibly making another smaller sound as they land. This event can be triggered by both the Survivors and the Killer. The noise of Crows will not present a visual cue to the Killer, unless they have the Perk Spies from the Shadows

, which provides a visual cue at a certain range.

Survivors can avoid startling Crows by crouching past them. However, if they come much too close to a Crow while doing so, it will still get startled. The Perk Calm Spirit

will prevent startling Crows while walking or running past them, with the aforementioned exception.

. A shot from The Redeemer

, The Deathslinger's weapon, will startle any Crow within 24 metres.

Crows tend to land near a Survivor if they stay still for too long.

Stillness Crows are special Crows that will spawn above a Survivor's head, flying in circles, if that Survivor is staying in an area for too long without performing any interactions such as repairing a generator for example. This also applies to when a Survivor hides inside a Locker

for too long, though the crows will then be perched atop the little roof.

Stillness Crows will caw, a noise that can be heard quite clearly from several metres away, which can alert a Killer who recognises this to your location. The circling crows are also quite visible from a distance, which will further alert an experienced Killer to your location, even without the noise indicator from the third Stillness Crow.

Up to three Stillness Crows can appear unless the Survivor

moves away from the area they were in or starts performing interactions. The third Stillness Crow will give the Killer a noise indicator to the Survivor's precise location.
This is to prevent Survivors from going AFK in Lockers for the whole duration of a game or for hiding in the same area for too long (e.g. Hatch camping).

Note that the Killer

will receive the Loud Noise Indicator on a 10-second-loop as soon as the third Stillness Crow spawns.

In order to lose Stillness Crows, a Survivor needs to start interacting with something in the area or leave it and move on to another area of the Map. Crows are lost in specific intervals: