The Trapper is an area-control Killer, able to apply pressure across the Map by placing deadly Bear Traps for Survivors to step into.

, allow him to chase and carry Survivors more effectively.

He is focused on physical attributes and making use of his strength and the Survivors' fear.

Difficulty rating: 簡単
(based on the amount of time and effort that is required to properly learn to play him and use his Power effectively) 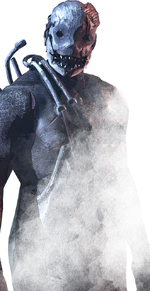 Additional Lore can be found in Tome I - Awakening: Blood, Brass and Grit.

Evan MacMillan idolised his father. It wasn't just that he was heir to a great fortune, it was the way he ran the estate. Raised under his firm hand, Evan had taken to running the workforce with an iron hand. Production was always high and the MacMillan Estate prospered under father and son.

As Archie MacMillan's mental health slowly disintegrated, Evan protected him from the herd who wanted a piece of the fortune. No matter what his father asked of him, Evan would do.

When Archie MacMillan finally snapped, Evan became his enforcer in what would become known as the worst mass murder in modern history. They never proved that Evan lead over a hundred men into those dark tunnels before detonating the explosives and sealing them to their fate.The tale of the MacMillan Estate is a tale of wealth and power gone very wrong.

How many victims fell to the hands of father and son is unknown. No record is ever made of what became of Evan MacMillan. His father is another unsolved puzzle, found trapped in the locked basement of his own warehouse - starved and abandoned.

Once obtained, other Killers will be able to find The Trapper's Perks in their respective Bloodwebs from that point onwards

The Cleaver is the primary weapon of the Trapper. A brutal cleaver, hammered by his own hands from the metals of the mine.

BEAR TRAP:
Press and hold the Power button to bend down and set a Bear Trap, priming it in the process.
Survivors caught in a Bear Trap become Injured

and are temporarily immobilised until they either free themselves, are freed by another Survivors, or are struck down by The Trapper or picked up from the Bear Trap.

There are currently 2 Achievements related to The Trapper.

The value of Console Achievement that differs from the Steam (PC) version of Dead by Daylight is written in Purple.

Players can customise their Character by choosing one outfit style from each category. Blood-stained attire is obtained after The Trapper reaches Level 50 and prestiges.

Some Items of clothing can only be worn if the appropriate DLC is owned.

For more go to The Trapper's Gallery