From Dead by Daylight Wiki
(Redirected from Executioner)
Jump to: navigation, search

Pyramid Head or "The Executioner" is one of 21 Killers

He was introduced as the Killer of CHAPTER XVI: Silent Hill, a Chapter DLC released on 16 June of 2020. 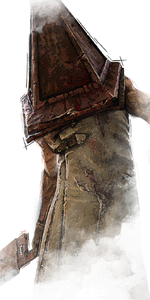 The Executioner is a map-manipulation Killer, able to torment Survivors with the hazards he creates. Affected Survivors will be vulnerable to his special Hook, the Cage of Atonement and his special mori, Final Judgement.

allows him to aggressively defend his prey while deceiving and tracking Survivors. 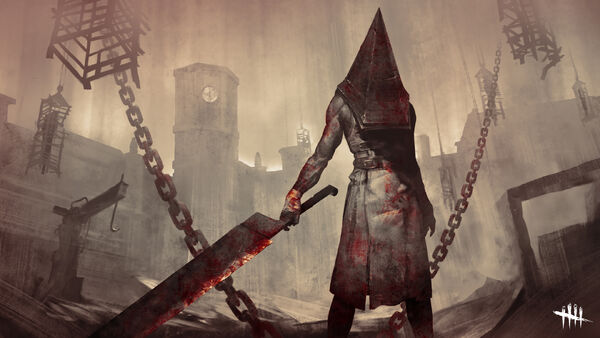 A sadistic and merciless executioner, Pyramid Head is fixated on dispensing punishment through pain.

Encumbered by the steel frame upon his head and with a hulking great blade in tow, he stalked the hellish corridors of Silent Hill, committed to a duty that no one truly understood. Where he trod, even monsters fled for the shadows, and those who crossed his path fell victim to unrestrained acts of aggression.

When his duty was complete and his presence no longer needed, he prepared for the long rest — and yet, his skills were required elsewhere. The Fog that streamed over him was somehow different than that he was accustomed to in Silent Hill, as if each wisp contained the nerves of a creature, writhing, seeking him out.

There was an unspoken agreement in that moment. The billowing cloud was an invitation to duty and sadism, and Pyramid Head, taking a step into The Fog, accepted his obligation once more.

Once obtained, other Killers will be able to find The Executioner's Perks in their respective Bloodwebs from that point onwards.

A massive chef's knife to reap affliction and misery from his victims.

Punishment of the Damned:

Add-ons for Rites of Judgement

There are currently 2 Achievements related to The Executioner.

Players may customise their Character by choosing one outfit style from each category. Blood-stained attire is obtained after The Executioner reaches Level 50 and prestiges.

The Executioner is currently part of 1 DLC package: