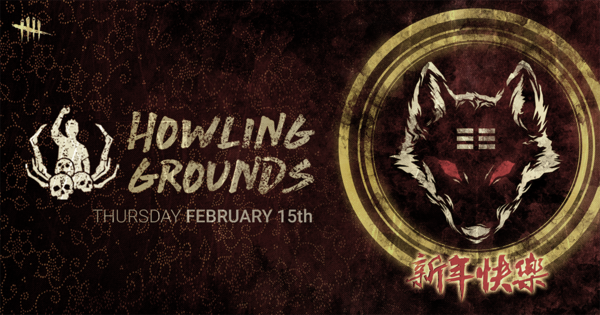 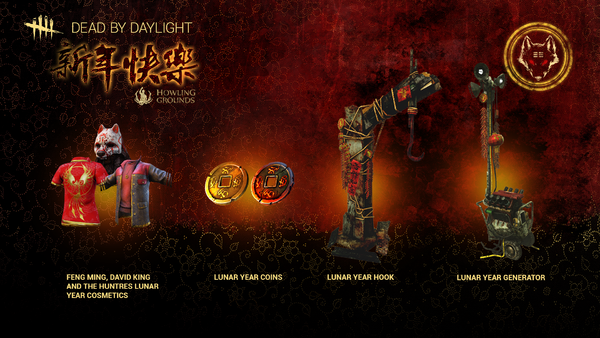 Howling Grounds is an Event in Dead by Daylight

It kicked off the in-game celebrations in honour of the Chinese Year of the Dog.

The Event was announced two days prior, on 13 February 2018.

It featured some personal and some community challenges.

The following Cosmetics rewarded Players for completing the Personal Challenges (Huntress and David) and the Community Challenge (Feng).

The Event featured personal Challenges that required the Player to collect special Coins in order to unlock the Cosmetic Rewards.

The Player would have to find and burn a new Offering called the Red Envelope, calling upon The Entity

for very special Generators and Hooks. The Player would earn Golden Coins and Burnt Coins when they'd fix Lunar Generators or hook Survivors for the first time on a Lunar Hook.

They would need to collect as many Coins as possible, as they were the key to unlock the Howling Grounds cosmetic rewards. There were one reward for either side respectively: one for David King, one for The Huntress.

Should the Player have accomplished their Personal Challenge, they could keep on collecting Coins as they would count towards unlocking a third, community-wide cosmetic reward for Feng Min, which was achieved on 22 February 2018.