From Dead by Daylight Wiki
(Redirected from Legion)
Jump to: navigation, search

Frank, Julie, Susie, Joey or "The Legion" are one of 21 Killers

They were introduced as the Killer of CHAPTER X: Darkness Among Us, a Chapter DLC released on 11 December 2018.

The Legion is a band of merciless Killers, able to rush down helpless Survivors with their power, Feral Frenzy. Attacks made during their frenzy inflict lingering internal damage, downing any Survivors that are not quick enough to react.

, give them the ability to locate their prey and attack savagely while transporting Survivors to the Hook.

Difficulty rating: Intermediate
(based on the amount of time and effort that is required to properly learn to play them and their Power effectively) 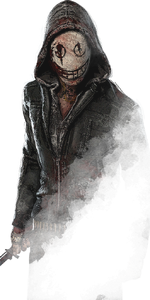 Additional Lore can be found in Tome III - Escalation: Soldiers of Mayhem.

Frank Morrison was nineteen and had little to show for it. He'd stopped attending school after being kicked out of the basketball team for shoving a referee into the stands. Yet Frank was a man of potential, who could light up a room despite his bleak childhood. At six years old, he'd been taken away from Calgary to start a circuit of foster homes. No matter how many times he'd lashed out, threw tantrums and got into fights, they'd kept moving him to new, unfamiliar houses. His last move had been three years prior when his last foster dad, Clive Andrews, had picked him up from the adoption centre. They'd been on the road for seven hours before reaching a small bungalow in Ormond. It would be the longest time they'd spend together. Clive was too busy trading cheques from Family Services for drinks at the bar.

Ormond was a small, stale place; a remote town of six thousand inhabitants where grey winters drag on for most of the year. Frank did everything he could to get into another adoptive family, but he changed his mind when he caught the attention of Julie, a beautiful girl who was convinced that she deserved better than a life in Ormond, and Frank, as an outsider, was her ticket out. Frank attended the parties she threw where everyone was younger than him and easily impressed, which he liked. He met the impulsive Joey, who liked to show off, and the shy, naïve Susie, who was Julie's best friend.

They would hang out at an abandoned lodge up Mount Ormond. Their time together was the perfect break from the boring conformity of their small, insignificant everyday lives. Frank saw it as an opportunity to shape their lack of experience into something powerful. He lined up nights of debauchery and rampage, testing their limits. Bullying , vandalism, and theft were essentially their weekend plans. It came to a point where they would do anything he asked. Nothing was off-limits when they put their masks on. One evening, Frank dared Joey to vandalise the store that had recently fired him. They snuck inside easily enough, as the building was supposed to be empty after closing hours. But a cleaner who was still there grabbed Julie as soon as she came near. Hearing her stifled cries, a dark impulse took over Frank. He rushed to her aid, knife in hand, and without hesitating, planted the blade into the cleaner's back.

As the group stared at Frank in shock, he ordered them to finish the job. Joey clenched his jaw, grabbed the knife, and stabbed the bleeding man in the ribs. Susie didn't want to do it. Frank shouted at her; they had to finish what they'd started. Julie closed her eyes and slid the knife into the man's chest. She handed the wet blade to Susie: they were all in this together now. Susie stared at Julie in disbelief as Frank grabbed her trembling hands and inserted the knife deep into the man's throat. Frank told them to move fast; they mopped the blood off the floor, stashed the body in the trunk of Joey's car, and drove up Mount Ormond.

All four were digging in the muddy snow to dispose of the body when Frank spotted something moving through the woods. He grabbed his knife and broke from the group to check it out. The Fog thickened around Frank, becoming so dense that he soon could no longer see ahead. He retraced his steps and stumbled onto an ominous trail. He followed the eerie path, as if called by the darkness. Julie, Susie, and Joey finished digging, but Frank was nowhere to be seen. Julie spotted his muddy footsteps in the snow and the three of them followed the trail, which took them deeper into the woods. When Julie, Susie, and Joey did not return home that night, their parents thought they'd run away with Frank. Each family came up with a different theory. The mood in the town changed, however, when a body was found by an abandoned lodge up Mount Ormond.

Once obtained, other Killers will be able to find The Legion's Perks in their respective Bloodwebs from that point onwards.

A sharp blade with a jagged saw back and textured handle.

Deep Wound:
While Feral Frenzy is active, hitting a Survivor who is not currently afflicted with the Deep Wound

While Feral Frenzy is active, hitting a Survivor who is already afflicted by Deep Wound or missing an attack:

Hitting a Survivor with a basic attack while Feral Frenzy is not active will deplete the Power gauge by half of its maximum.

There are currently 2 Achievements related to The Legion.

Players may customise their Character by choosing one outfit style from each category. Blood-stained attire is obtained after The Legion reaches Level 50 and prestiges.

The Legion is currently part of 1 DLC package:

For more go to The Legion's Gallery