From Dead by Daylight Wiki
(Redirected from Lighting)
Jump to: navigation, search 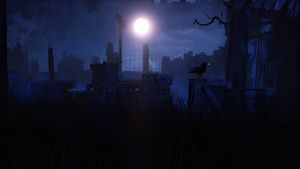 The Moon shining bright in the sky.

and still is almost the sole source of light, with other sources of light including lamps, fire pits and fully repaired Generators

Moonlight Offerings are not stackable as such as only very specific combinations seem to stack. These include:

Offerings which would cancel each other out always go in order of Rarity: the higher trumps the lower one.