Madness is both a Game Mechanic and a Status Effect

in Dead by Daylight

that was introduced with Patch 1.5.1 alongside The Doctor

Madness affects the sanity of the Survivors

and affects/hinders their ability of performing certain interactions.

Madness is a Game Mechanic that is unique to The Doctor, as it is directly linked to Carter's Spark

Madness comes in three Tiers, Madness I, II & III. Chevrons indicate the current Madness-tier to the affected Survivor. Madness Tiers are fixed, meaning that once it tiers-up, there is no way to bring it back down, with the exception of Madness III, which can be lowered back to Madness I by performing the Snap Out of It action.

Madness I is achieved after receiving 1 Madness Point, it affects Survivors with the following afflictions: 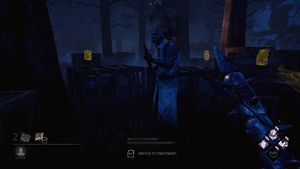 Madness II is achieved after receiving 2 Madness Points, it affects Survivors with the following afflictions:

Madness III is achieved after gaining 3 Madness Points, it affects Survivors with the following afflictions:

Depending on The Doctor's choice of Add-on

load-out, Survivors can have additional afflictions based on their Madness Tier.

The possible types of additional Afflictions are:

Madness is applied through either a Shock Therapy Attack or a Static Blast:

The Shock Therapy attack is The Doctor's primary Power ability. Charging Shock Therapy for 1 second will release a spark of electricity into the ground that will propagate as a cone in front of The Doctor and shock any Survivors within its range (10 metres). The shock wave will also travel through walls and obstacles and is only blocked by Lockers

A successful Shock Therapy attack will increase a Survivor's Madness by 0.5 Madness Points. A shocked Survivor will have a cool-down of 2.5 seconds applied to performing any interactions, such as vaulting and dropping. The use of Shock Therapy will cause The Doctor to experience a cool-down of 1.5 seconds to attacking or using his Powers.

The Static Blast is The Doctor's secondary Power ability that was added with Patch 3.5.0. Charging Static Blast for 2 seconds will release a burst of electricity into the ground, propagating outwards from The Doctor all the way to the boundary of his Terror Radius, instantly shocking any Survivor within his Terror Radius not hiding inside a Locker and increasing a Survivor's Madness by 1 Madness Point. Static Blast is then put on a cool-down of 60 seconds.

The only way to prevent the passive Madness build-up from happening was either hiding inside a Locker or leaving The Doctor's Terror Radius as quickly as possible, though there was a delay of 5 seconds before the Madness would start decaying after leaving it.

Madness can only be regressed through a special action called Snap Out of It.

Snap Out of It[edit | edit source]

This is a unique action that is only available on Madness III and will regress Madness to Madness I.

Snap Out of It is a requirement for the afflicted Survivor to regain their ability to perform interactions inhibited by Madness III. It is also advised to do due to the periodic screams and Aura-reveals, betraying their location to The Doctor.

Snap Out of It takes 12 seconds to perform.