From Dead by Daylight Wiki
(Redirected from Nightmare)
Jump to: navigation, search

Freddy Krueger or "The Nightmare" is one of 21 Killers

He was introduced as the Killer of CHAPTER VI: A Nightmare on Elm Street™, a Chapter DLC released on 26 October 2017.

He originates from the 2010 remake of the Horror Movie of the same name, A Nightmare on Elm Street.

The Nightmare is a nightmare Killer, passively pulling Survivors into his Dream World where Survivors are vulnerable to his Dream Abilities. His Dream Projection ability allows him quickly appear across the map and put pressure onto Survivors.

His personal Perks, Fire Up

, improve his abilities over time and make him stronger as the trial reaches its climax.

His Perks revolve around stopping Survivors from fleeing. They will make surviving a real pain for all, and managing to escape the Hunting Ground won't be easy.

Difficulty rating: Intermediate (Community) / Hard (Developer)
(based on the amount of time and effort that is required to properly learn to play him and use his Power effectively) 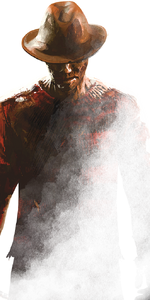 Even while he lived, Freddy Krueger was a creature of nightmares for those who truly knew him. Hiding behind a mask of warmth and friendliness, Freddy's actual temperament was known only to his victims. When those victims were finally heard, the parents of Springwood tracked Freddy down and took the law into their own hands. They thought that fire had rid them of a monster that night, that their children were finally safe, but evil as strong as his has a way of surviving.

Years passed, the horror was buried, the victims mercifully forgot. Then, somehow, Freddy returned, and dreams became nightmares once again.

Freddy focused his anger on those he felt had wronged him, building up to his one true obsession, Nancy Holbrook. But he underestimated her strength and resourcefulness. Together with her friend Quentin Smith, she managed to weaken Freddy, mutilating him and leaving him for dead once more.

Death didn't want Freddy the first time he encountered it, why did they think it would take him now? He emerged once more, consumed with vengeance. Then he turned his sights on the boy who had blocked his path to Nancy, his number one.

Freddy invaded Quentin's dreams, terrorising him night after night, until his strength and defences would be at their lowest. When the time was right, he forced the boy to return to the dark reflection of Badham Preschool. Here he would have his final revenge.

Freddy stalked the boy through the school's halls. He took his time, savouring every moment of the hunt. This was what he enjoyed the most, the smell of their sweat in the air, the ragged gasps of their terrified breath. They were his to toy with.

There was the boy, at the end of a long corridor. Too tired and scared to run anymore? Resigned to his fate? Freddy closed in, arms wide, claws raking the wall. Their tips traced along a pipe, the metallic shrieking only adding to the boy’s apprehension.

A shower of sparks rained on the ground, and into the liquid that covered the tiled floor. A blue flame blossomed and quickly engulfed the room.

The boy took flight as Freddy burst from the flames in a fury. Rooms and walls raced past in a blur until they were in Freddy's basement. There would be no escape from here.

Slowly Freddy closed in on the boy. His fear was so strong now that Freddy could almost taste it, but his eyes burned with a defiant hatred that was almost admirable.

Freddy drew back his claws.

Then Freddy felt another presence with him; something old, powerful and dark. A miasma enveloped him and the only sensation was a sound like wooden beams flexing and creaking in the distance. The echoing groan of metal crushed against metal. Something arcane and unknowable, half-way between language and pure terror.

A moment of falling and spinning and then Freddy was back in the school. But not his school. It looked the same, but it felt different. His powers were tempered in some ways and focused in others. The boy had gone for now, but another prey walked the hallways. Some would be inconsequential; others would become his new favourites. All would fall before his claws.

Once obtained, other Killers will be able to find The Nightmare's Perks in their respective Bloodwebs from that point onwards.

Clawed Glove is the Primary Weapon of The Nightmare. A homemade device, crafted to torture and kill.

DREAM DEMON:
The Nightmare passively puts Survivors to sleep over 60 seconds, after which they enter the Dream World.

Dream World:
Once in the Dream World, Survivors are afflicted with the Oblivious

Status Effect, only hear The Nightmare's non-directional Lullaby, and can be affected by either Dream Snares or Dream Pallets placed by The Nightmare. Survivors can wake up by failing Skill Checks

, finding an awake Survivor to perform the Wake Up action, or by using one's personal Alarm Clock

found in the Trial Grounds.

Each successive Wake Up action takes twice as long to perform. Using the Alarm Clock will give Survivors a grace period of 30 seconds before they start falling asleep again.

SPECIAL ABILITY: Dream Snare
Press and hold the Power button to place a Dream Snare on the ground directly in front of The Nightmare. Survivors that come in contact with a Dream Snare will be afflicted the Hindered

Status Effect, slowing them while they remain with its Area of Effect and for a short duration after leaving it.

SPECIAL ABILITY: Dream Pallet
Press and hold the Power button to place a Dream Pallet at an available location. A Dream Pallet dropped by a Survivor will be destroyed immediately and not stun The Nightmare.

in view. Releasing the button early will cancel the action. For each Survivor in the Dream World, the cool-down of using Dream Projection is reduced by stack-able 15 %.

"You have nothing to worry about. This won't hurt one... little... bit." — Freddy Krueger

There are currently 2 Achievements related to The Nightmare.

Players may customise their Character by choosing one outfit style from each category. Blood-stained attire is obtained after The Nightmare reaches Level 50 and prestiges.

The Nightmare is currently part of 1 DLC package:

For more go to the Nightmare's Gallery