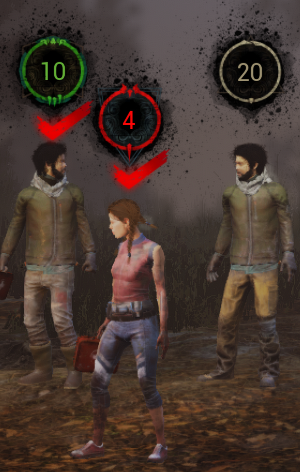 The Player's Rank is dependent on how many "Pips" they have accumulated from playing ranked games (any game-mode that isn't Kill Your Friends). The number of a Character's Rank indicates the Player's overall skill level at the game. The highest is Rank 1, the lowest Rank 20. To "rank up" means to have gained enough Pips to increase your Rank by one. Similarly, "ranking down" means to have failed to receive a Pip.

By ranking up, Players will be placed in lobbies against other Players of similar Ranks, and will display more colourful Rank borders.

There are two types of Ranks in the Game: Killers

have a Killer Rank, whilst Survivors 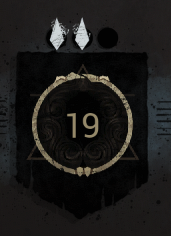 After a match has concluded, the number of Pips obtained will be put towards the Player's Rank for either the Killer Rank or Survivor Rank. If a Player has filled their Pip slots to the maximum, the Player will Rank up and their Pips will be reset, up to Rank 1. If a Player completes a match without receiving a Pip, they will lose a Pip from their Rank. If they lose enough Pips, they will de-rank and lose a Rank, up to Rank 15. De-ranking to below Rank 15 is no longer possible.

Players in Ranks 20 through 16 cannot de-pip, they will either gain a Pip or Safety Pip until they reach Rank 15.

As a Player ranks up, the number of Pips to reach the next Rank will increase.

At Rank 1, Pips are no longer accumulated. In subsequent games, losing one pip will return the player to Rank 2 with 4 pips.

As of Patch 1.9.4, the Ranking for both Killers and Survivors is now determined by the Emblems System.

The Quality of Emblems determines the amount of points they award towards ranking:

As of Patch 2.6.0, the Pip conditions depend on the specific Rank group (colour) the Player's Character is in. This chart shows how the number of points received will affect whether the player loses a Pip, gets a Safety Pip, gains one Pip, or gains two Pips. (For example, if a Rank 19 player’s points add up to 10, say two Gold Emblems and two Silver Emblems, then the player will gain one Pip as shown in the chart.)

On the 13th of each month, Ranks reset. Currently, no ranking rewards are given by the end of the season.

As of Patch 3.4.0, the Players are reset back to a specific Rank of the previous Crest colour, with exception of Players in Brown Ranks:

A player receiving one pip after a match.

In order to rank, Players had to accumulate sufficient amounts of Bloodpoints

Survivors had the following Categories: Objectives, Survival, Altruism and Boldness.

Killers had the following Categories: Brutality, Deviousness, Hunting and Sacrifice.

After the trial ended, or if the Player died, the Player would be shown their total score as a breakdown of the four Categories. Concurrently, a red bar beneath this information would begin to fill - with the bar representing the Player's total Bloodpoints accumulated that counted towards pipping and thus ranking up or down. In order to gain Pips, the red bar must have filled up past the first white pip. Players could earn up to two Pips per trial.

As of Patch 1.5.3, the Pip system for Killers was based upon achieved sacrifices and not upon the amount of Bloodpoints achieved in a scoring category, those two were now completely independent.

Killers earned Killer Goals by bringing a Survivor closer and closer to being sacrificed. The scoring events necessary for that were:

Up to Patch 2.1.0, a Players post Rank Reset Rank was determined by the amount of Ranks they had obtained during the Season, which was converted into Pips that were awarded. This would reset Rank 1 Players to Rank 15 and 2 Pips, which is the equivalent of 20 Pips.

With Patch 2.1.0, the Developers adjusted the rank reset Pip thresholds. These thresholds were used until Patch 3.4.0 instead determined the Rank Reset via the Rank Crest colours.