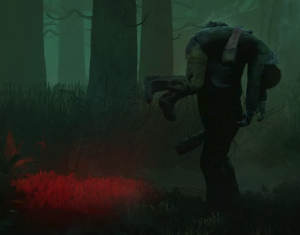 The Stain in front of the Trapper.

The Red Stain, as it was dubbed by Benedict Baker, is an ominous red glow all Killers emit from their head and illuminates their surroundings right on front of them.

The Red Stain an integral Game Mechanic that intends to betray a Killer's location and movement direction to the Survivors when in close proximity to them, as they can see it edging out from around corners even if they cannot see the Killer yet, allowing them to adapt their jukes accordingly. However, an adept Killer can also use this behaviour to their advantage and momentarily hide their Red Stain by walking backwards or sideways around corners or walls in order to try and trick the Survivor, potentially catching them off-guard.

The Killer cannot see their own Stain, with the exceptions of it sometimes being reflected off of their Weapon under specific circumstances.

Survivors are constantly able to see The Red Stain on the floor in front of the Killer, unless it is hidden by the use of cloaking-Perks or Powers.

Unlockables can be used to change the behaviour of The Red Stain: