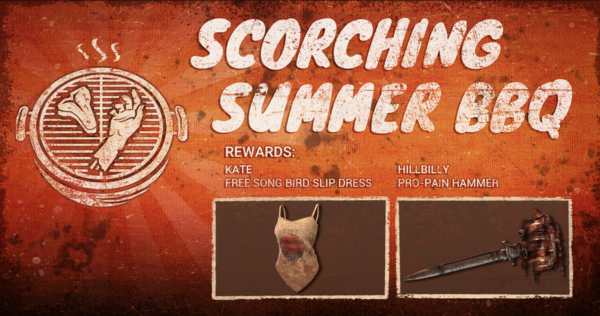 The Scorching Summer BBQ is an Event in Dead by Daylight

Scorching Summer BBQ is a summer-themed version of the Howling Grounds Event.

It was announced 4 days earlier, on 3 August 2018. It was originally planned to last until 21 August 2018, but extended to the 23rd due to connectivity issues during the first two days of the Event.

You must burn a BBQ Invitation

in order to obtain bonus Bloodpoints

The following Cosmetics rewarded Players for completing the Personal Challenges.

The Event features personal Challenges that require the Player to collect special Tokens in order to unlock the Cosmetic Rewards.

Each Map spawns with 2 Frozen Cocktail Machines and 2 Grill Hooks by default.

The Player can to find and burn a new Offering called the BBQ Invitation, calling upon The Entity

The Player earns Frosty Margaritas and Survivor Chops when they fix Frozen Cocktail Machines or hook Survivors for the first time on Grill Hooks. They also gain bonus Bloodpoints

for doing so, even though Survivors will be unable to earn 7 Frosty Margaritas in a single trial due to the limit of only 5 Generators being fully repairable. However, the bonus Bloodpoints gained from completing a Frozen Cocktail Machine are global and awarded to all Survivors. All other bonus Bloodpoints are awarded post-trial during the tally screen and only if the Player had burnt a BBQ Invitation

The Player needs to collect as many Tokens as possible, as they are the key to unlock the Scorching Summer BBQ cosmetic rewards. There is one reward for either side respectively: one for Kate Denson, one for The Hillbilly.