From Dead by Daylight Wiki
(Redirected from World)
Jump to: navigation, search 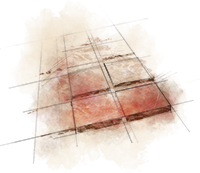 Benedict Baker's depiction of the Procedural.

. Each Realm was the site of a violent tragedy in the past and they now serve as the Arenas for The Entity's trials.

The location of the trial is chosen by The Entity. Players can influence The Entity's choice by burning certain Offerings

are placed to The Entity's whims. Even the terrain itself shifts from trial to trial.

The Realms are pockets within The Entity, who constructs everything from itself except for the Killers and the Survivors. The Realms do not co-exist at all times, but are rather created whenever needed. The location of The Campfire is also located within such a pocket. The Woods and Fog beyond the Trial grounds represent the boundaries of the pocket and are just a façade.

Sub-Realms are usually different planes of existence within the Realm of The Entity. There are currently 6 known Sub-Realms:

Over the course of Dead by Daylight's existence, several either unreleased or unused Maps have been found in the Game files.
It is not known whether they will be released at some point or be removed from the code eventually.

Maps listed in gold can (still) be found in the Game code, Maps in fuchsia have been removed over time.
Their names are generally WIP names of Maps and a Map's actual name upon release would likely be different: